CSLegal will host a ports & harbours management seminar on September 29th in Yarmouth, NS. The purpose of this event is to bring together members of the ports and harbours management community to discuss operational and planning issues. See the attached poster for more details. Please contact Sarah if you are interested in attending: (902)209-6537 or sarah@cslegal.ca

CSLegal will host a ports & harbours management seminar on September 30th in Yarmouth, NS. The purpose of this event is to bring together members of the community to discuss operational and planning issues. See the attached poster for more details. Please contact Sarah if you are interested in attending: (902)209-6537 or sarah@cslegal.ca 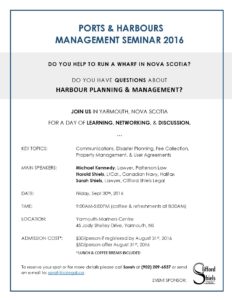 Sarah is in Toronto to attend and present at the Coastal Zone Conference 2016. A brief overview of her presentation entitled Derelict & Abandoned Vessels in Canadian Waters: Legal Options is below. To discuss the legal options she proposes, contact Sarah directly to discuss options for specific situations.

The phenomenon of derelict vessels is a recurring challenge for coastal communities. Unseaworthy ships sometimes arrive unannounced; at other times they simply outstay their welcome. Either way, the presence of these vessels threatens the integrity of local economies and marine ecosystems. This is a problem that must be dealt with.

Regrettably, Canadian law surrounding the clean-up of derelict vessels is murky at best. According to federal law and policy, the onus remains on the named owner of a vessel to take responsibility and spearhead the removal process, however many registered owners simply refuse to step up. This unresponsiveness is often explained by burdensome personal and financial histories, which become common backdrops for the condition and circumstances of derelict vessels. Endeavouring to track down the registered owner of a derelict vessel and force him or her to accept responsibility can be expensive and unproductive.

Recognizing these challenges, Sarah suggests the use of some existing legal tools for dealing with derelict and abandoned vessels while highlighting practical gaps and limitations. Drawing upon her experience as a marine lawyer, Sarah shares strategies for working within the current legislative framework to find real solutions and minimize risk, and provides suggestions for legislative and policy development.

Nova Scotia is a province with a proud sea-faring history. Prior to colonization our coastlines were inhabited by Mi’kmaq families who fished for a variety of fish and shellfish species during the summer months. In the 1700 – 1800s thousands of Europeans, Loyalist, and Acadians arrived by sailing vessels and steamships. Now in the 21st century our coastline is dotted with marinas, harbours, and ports which cater to a combination of military and commercial vessels as well as pleasure craft.

To facilitate access to the ocean, many coastal property owners have built wharves, docks, and boat ramps. Some of these structures are built on privately owned water lots. Others are not. In either case is important for property owners to understand the extent of their rights so as to avoid costly removal orders down the road.

You may also require a permit to establish a mooring or permission from your upland neighbour, depending on whether the mooring is within 60 metres of the shoreline. You can find more information about this process here.

A water lot is defined as a parcel of land covered by water, also known as submerged land. “Water lot” is the common term but a more accurate label might be under-water lot because the “parcel of land” is just the seabed. Ownership of a water lot does not extend to ownership of the water column. This is because in Canada the public has a paramount right to pass through navigable waters, including the Atlantic Ocean, and this right can only be interfered with via legislative authority.

Therefore if you would like to build or repair a wharf, ramp, or skidway on oceanfront property and you own the water lot you will have to comply with the federal Navigation Protection Act (“NPA”). The NPA requires anyone building a work that could obstruct navigation to apply to the Minister for approval. Importantly, this approval is not required for certain minor works. It seems that the Minor Works Order will be updated this coming fall so in the meantime property owners planning new projects or repairs to existing structures should contact the Navigation Protection Program directly if they have questions about compliance. Here is the contact information for the Regional Manager of the Atlantic Region: 506-851-3113 or NPPATL-PPNATL@tc.gc.ca.

As a final point, if you are considering purchasing oceanfront property you should make sure that your lawyer and/or surveyor investigate any buildings or structures situated along the shoreline or in the water adjacent to your property. You should never assume that the previous owner acquired the appropriate authorizations before building. It’s possible, perhaps even likely, that the previous owner had good intentions without realizing that a permit was required. You could find yourself the proud owner of a structure that cannot be repaired and must ultimately be torn down at your expense.

For more information about your rights as a coastal property owner, please contact Sarah by phone or e-mail: 902.209.6537 | sarah@cslegal.ca

The Fisheries Act is federal law that engages with Canadian fishing rights and obligations.  Offences under the Fisheries Act include: breach of licence conditions, polluting waters inhabited by fish, obstructing other vessels, etc.

As a general rule, the federal government has the authority to regulate Canadian coastal waters from the low-water line to a distance of 200 miles from the coast (potentially up to 350 miles in some cases). The federal government has specific constitutional authority to make laws in relation to “sea coast and inland fisheries” and “navigation and shipping” (sections 91(12) and 91(10). The province has authority over “property and civil rights in the province” (section 92(13)). Some areas, such as environmental concerns, receive treatment by both the federal and provincial governments. You can read more about this topic here.

In Canada it is critical that law-makers and other agents of government act within the appropriate scope of authority and respect the limits of their allotted powers. If they fail to do so, this could render their laws or actions invalid. Canadian courts consider it very important that each level of government respect the other’s authority.

Offences under the Fisheries Act are different from offences under the Criminal Code.  They are regulatory offences and not pure criminal offences. To prove the defendant committed a regulatory offence the Crown only has to prove the facts of the offence (actus reus) and not the accused’s intent (mens rea). If the Crown succeeds in proving that the offence occurred, then the defendant may offer a due diligence defence in accordance with section 78.6 of the Act:

78.6 No person shall be convicted of an offence under this Act if the person establishes that the person

(a) exercised all due diligence to prevent the commission of the offence; or

(b) reasonably and honestly believed in the existence of facts that, if true, would render the person’s conduct innocent.

Under the Fisheries Act, the Crown may elect to proceed by summary conviction or by indictment (section 78). Summary offences are less serious and carry a lesser penalty, ranging up to $100,000 or to one year’s imprisonment. The limitation period for the Crown to begin a proceeding with respect to a summary offence is 5 years from the date of the offence (section 82). There is no time limitation for indictable offences.

One of the offences listed under the Fisheries Act is obstruction of a fishery officer:

62. No person shall obstruct or hinder a fishery officer, a fishery guardian or an inspector who is carrying out duties or functions under this Act.

This section of the Fisheries Act is similar to but different from section 129(a) of the Criminal Code:

(a) resists or wilfully obstructs a public officer or peace officer in the execution of his duty or any person lawfully acting in aid of such an officer,

(b) omits, without reasonable excuse, to assist a public officer or peace officer in the execution of his duty in arresting a person or in preserving the peace, after having reasonable notice that he is required to do so, or

(c) resists or wilfully obstructs any person in the lawful execution of a process against lands or goods or in making a lawful distress or seizure,

(d) an indictable offence and is liable to imprisonment for a term not exceeding two years, or

It should be noted that the Criminal Code definition of “peace officer” includes fishery officers while they are performing duties or functions under the Fisheries Act or the Coastal Fisheries Protection Act. That means that if you obstruct a fishery officer during the course of an investigation you could be charged under the Criminal Code for obstructing a peace officer.

In 2007 a case called R. v. James was heard in the Newfoundland Provincial Court. The facts of this case revolved around a number of fishers who were caught fishing lobster out of season. More than eighty charges were laid, ranging from unlawful confinement, to Criminal Code obstruction and obstruction under the Fisheries Act. Two individuals were found guilty of committing both types of obstruction. The judge in this case approached Criminal Code obstruction along the lines of intentional destruction of evidence. The Fisheries Act obstruction was limited to temporarily interfering with the investigation, which amounted to getting in the way of the fishery officers and hampering their attempts to get free of ropes jammed in their propeller.

There haven’t been a lot of cases addressing this particular issue, but R. v. James demonstrates that it is open to the court to penalize fishers with charges of obstruction under both the Criminal Code and the Fisheries Act at the same time. Because of the burden of proof I think that fishery officers are more likely to lay charges for the Fisheries Act offence of obstruction and only charge fishers with the Criminal Code offence where there is clear intent to interfere with an investigation or destroy evidence.

If you have questions regarding your fishing rights or obligations please contact Sarah at sarah@cslegal.ca or 902.209.6537.

Municipal wastewater treatment plants allow trace elements of household pharmaceutical products such as ibuprofen to enter lakes, rivers, and coastal areas. Scientific studies generally indicate that the concentration levels of these chemicals are too small to cause real harm to humans and local wildlife but there is a lot of uncertainty surrounding long-term effects and potential risk of bioaccumulation (i.e. persistent concentration in one organism over time).

The precautionary principle present in international and Canadian law acknowledges that “where there are threats of serious or irreversible damage, the lack of full scientific certainty shall not be used as a reason for postponing measures to prevent environmental degradation” (Nova Scotia’s Environment Act). In other words, if a given activity poses a significant threat to the health of the environment, uncertainty surrounding the exact consequences of that activity should not be used as an excuse to stall preventative measures.

The challenge for policy-makers with respect to effluent management and similar emerging issues is to determine (1) when threats of environmental harm are significant enough to justify action, and (2) how to interpret and apply existing legal principles in light of new scientific findings. Sarah will be addressing these issues today in a presentation at the Coastal Zone Canada conference in Halifax, NS.

To accompany Sarah’s presentation, we have compiled a quick reference guide to Canadian wastewater laws and regulations. You can find it below, with links to free resources on CanLII.